It seems to be a kind of forgery, which is described in Victor Engstrom's DANISH WEST INDIES MAILS, 1754 - 1917, Volume 3, pg. 20-11: "The 14c bi-coloured stamp has been faked by altering the 12c stamp, mostly of the second printing, the shade of which is just slightly different from the 14c stamp. The fake has been done by scraping away the large and the small "2", and painting a "4" in their places. (...)

The copy shown in the scan can rather easily be detected as forgery by the perforation (KII instead of KI), the maingroup (4 instead of 3) and the fantasy cancellation CHRISTIANSTED 2 78 (year instead of month). With a closer look you also can see, that there was made some painting in the inner circle around the large 14 with a slightly blueish green colour.
Bernd Stein 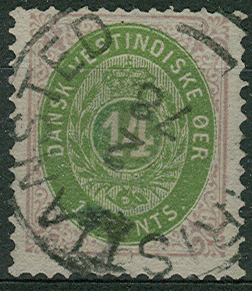 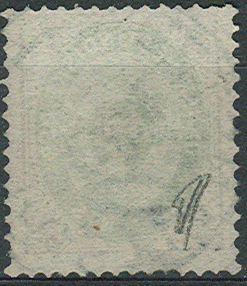